A community park ranger wants to open new fronts in the war against the moth plant.

Kara Goddard says moth plant can take over and frequently out-competes and replace native plants, smothering and strangling whatever it climbs on.

“Despite our best efforts, with annual competitions to collect the plant and dispose of it across many areas of the city, moth plant is clinging on and remains a serious nuisance.

“Its seeds are poisonous, its sticky milky-white sap traps insects and is a skin irritant that can even cause dermatitis,” she says.

Moth plant is a vigorous evergreen climbing vine with arrow-head shaped leaves that are dark green on top and grey-green underneath. Its stems are woody and leak milky sap.

It flowers creamy white to pink clusters from December to May that are followed in autumn-winter by large light green oval pods that look something like the vegetable choko. The seedlings are shade tolerant and establish easily.

Goddard says the plant loves the shade and is mainly found in forest margins and gaps, hedges, wasteland, roadsides and coastal areas, but is also present in many gardens around Auckland, urban and rural.

“Once it gets established it can be a nightmare to deal with because the pods contain up to 1000 seeds each.

“When the pods dry they split open and the wind can carry seeds more than 20 kilometres. The seeds also survive in and can be spread via water, and they can stick to clothing and animal fur,” Goddard says. 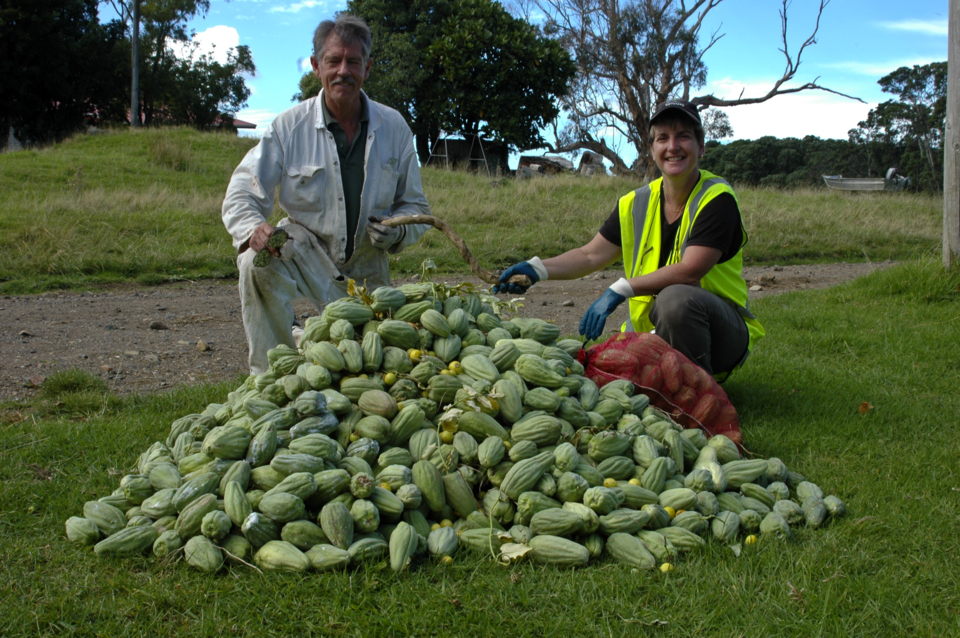 The plant nasty is so well-equipped to survive that even pods on dead vines still open and spread seeds.

Goddard says the plant’s distinctive features make it easy to identify in home gardens, where it should be dug or pulled out.

“The problem is disposing of the seed pods,” she says. “They can’t be home composted and need to go to green waste or landfill.

Under Auckland Council’s Regional Pest Management Plan, Waiheke or Rākino land occupiers must destroy all plants, while Aotea / Great Barrier residents can have Council destroy them by reporting sightings via pestfree@aucklandcouncil.govt.nz

Across the city, no one can breed, distribute, release, sell, offer for sale, exhibit, plant or allow moth plant, to be planted.