Earlier this month Auckland Council announced that the last three stages of the Wai Horotiu Queen Street Project – from Customs Street to Mayoral Drive – would be delivered in one cohesive design.

Today, 22 September, Aucklanders will see the detail of that design. Plans show how the city’s premier street will look, feel and function when the work is completed in September 2022.

The main feature of the design is substantially wider footpaths, giving all people on foot and on wheels designated spaces to ensure they co-exist safely.

From Shortland Street to Wellesley Street on the eastern footpath, the new layout enables:

A tactile rim, contrasting colour, a change in paving texture, planting, street furniture and some surface signage will all delineate the multi-use path for the safe movement of slow cyclists, scooters and people moving quickly on foot, away from slower-moving pedestrians enjoying the shops and activities in the street.

Cyclists travelling fast will be expected to use the road. 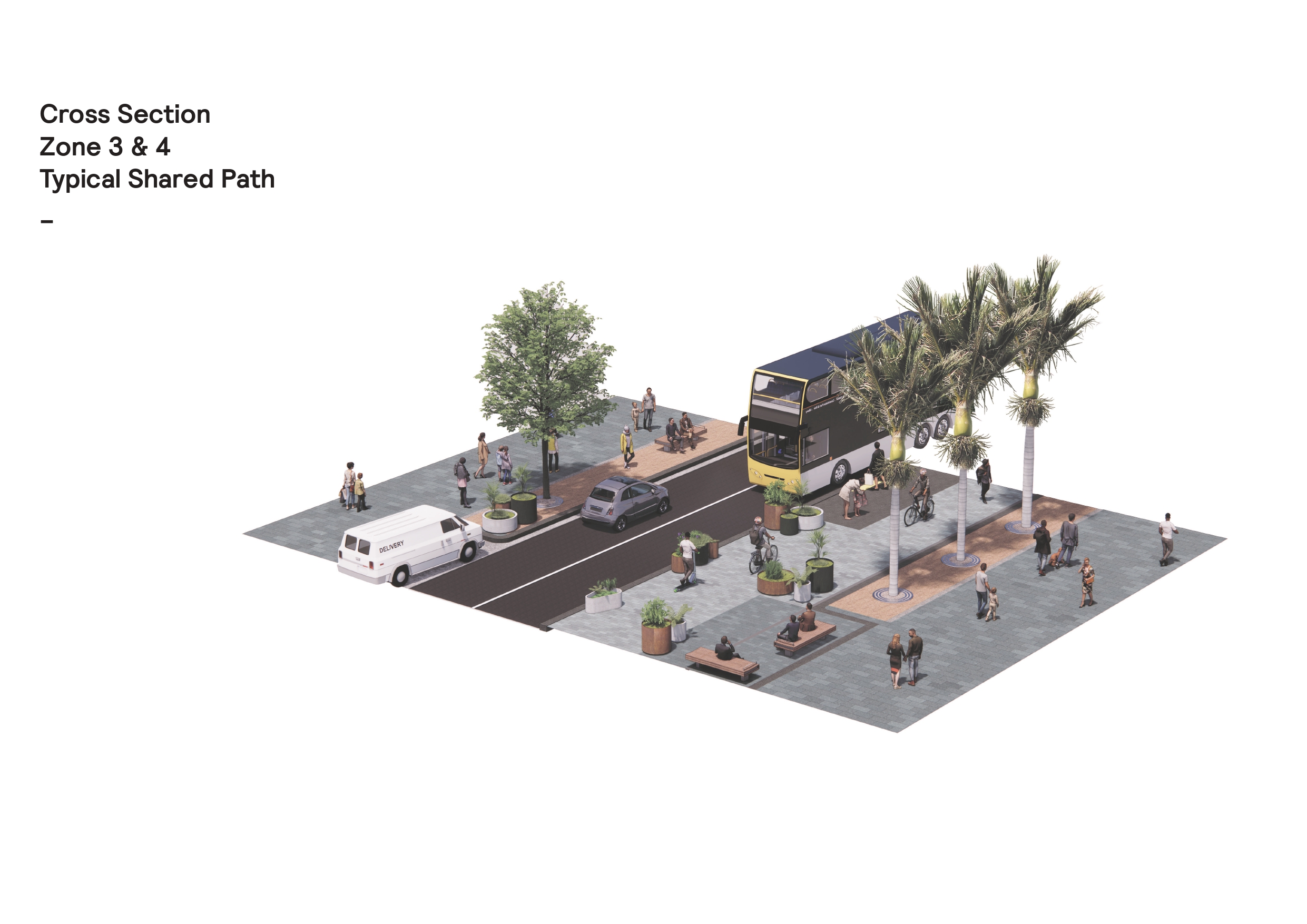 Cross-section of the section of Queen Street from Shortland Street to Wellesley Street.

Rachel de Lambert, landscape architect at Boffa Miskell, a member of Auckland Council’s Urban Design Panel and the peer review team for this project, says it aligns well with other progressive cities in an urban design sense.

“Positioning a dedicated pedestrian environment close to the shop frontages on the sunny, eastern side of the street and moving wheeled mobility to an area on the outer edge seeks to give people a more pleasant shopping experience. It also supports the flow into side lanes – such as Vulcan Lane and Durham Lane - and through site links.

“Managing the potential conflict between pedestrians and wheeled mobility is challenging the minds of urban designers around the world. Seeking to address it in this way in Auckland’s premier street, in my view, is a good solution,” she says.

The design gives Queen Street a distinctly green feel with planters filled with native plants creating an understory. Variation in the shape and materiality of planters will bring both consistency and textural variety to the streetscape.

The proposal will remove general car parking on Queen Street. Plans also show where the P5 and P15 loading zones/goods vehicle only loading zones will be placed along the street.

The northern section of Queen Street between Customs and Shortland Streets will be revisited later in the project, to achieve continuity.

The design documents revealed today also show how the Essential Vehicles Area (EVA) between Wellesley and Wakefield Streets – with two lanes in each direction – will work. The EVA is for buses, motorcycles, delivery and emergency vehicles, cyclists and scooters, but excludes private vehicles.

At the southern boundary of the EVA, four lanes will reduce to three between Wakefield Street and Mayoral Drive, allowing a pick-up and drop-off area outside the Town Hall.

Overall, the design gives more space for pedestrians to shop and linger, moving the Wai Horotiu Valley closer to the pedestrian-prioritised vision outlined in the City Centre Masterplan, which was unanimously endorsed by councillors in 2020.

Auckland Council Director of Infrastructure and Environmental Services Barry Potter says: “This will be in place until the CRL is completed and pending a future design which might include light rail. We will be constructing in a way that doesn’t dig up the road and allows us to change and remove materials and re-purpose them for future works,” he says.

The work will begin by the end of 2021, and by September 2022 the Wai Horotiu Queen Street Project will be complete.