Hunua pest control operation due to get underway

The latest pest control operation in the Hunua Ranges parkland, neighbouring Department of Conservation (DOC) administered land reserves, and some private land, is close to getting underway.

From mid-August, the operational team will be closely watching the weather forecast to determine an optimal weather ‘window’ for the first stage of the operation.

The operation will begin with an aerial application of the non-toxic pre-feed bait across the roughly 21,500-hectare operational area. This will be closely followed by the application of baits containing 1080 (sodium fluoroacetate).  The area will be treated in two separate blocks. 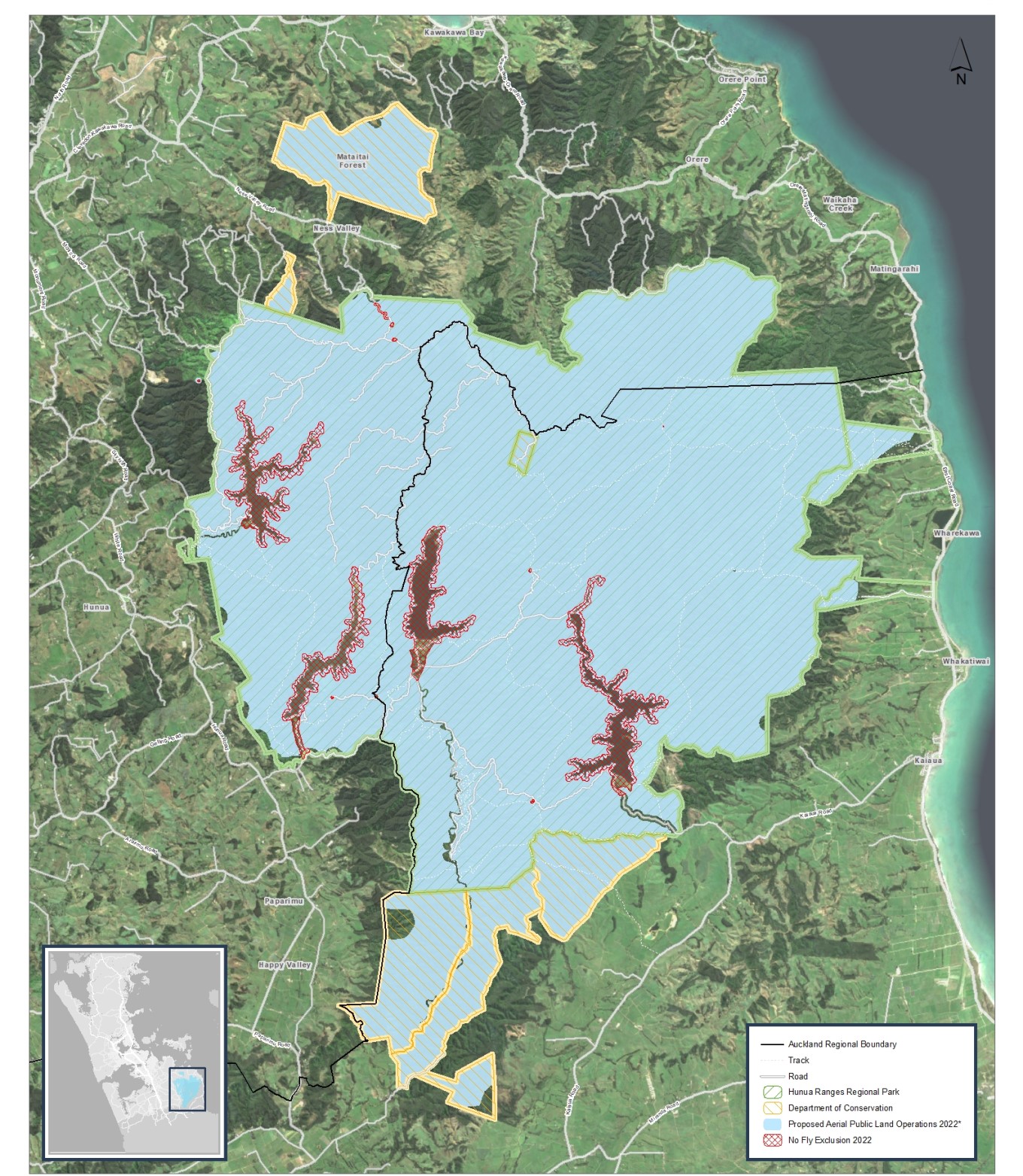 Auckland Council General Manager Environmental Services Rachel Kelleher says the operation will continue to protect the native wildlife that resides in the parkland.

“The Hunua Ranges is the largest area of native forest in the Auckland region and is home to many of Aotearoa’s threatened species.

“Together with the Department of Conservation and our iwi partners, our focus is on the protection of these species and our unique flora and fauna.

“Many of these native species are national taonga (treasures) and are vulnerable to introduced pests and diseases. However, through this collaborative work, significant gains and successes have been seen in the ranges over the last seven years, with many of our threatened species beginning to bounce back.

“This is particularly true for our native Kōkako which, after previously coming close to extinction, is once again thriving in the ranges, thanks in part to the 1080 operations carried out in 2015 and 2018.

“Since the last aerial pest control operation, we’ve continued to monitor the number of possums and rodents.

“While the data shows a slow possum reinvasion, rat densities have increased more significantly, putting the breeding success of our native birds, lizards and bats at risk once again.

“Despite the increase, numbers are still lower than they were before the 2015 and 2018 operations, which led to us making the decision to extend the period between operations from three to four years.

“Our aerial pest control operations are usually undertaken in either winter or early spring, when pests are hungry, visitor numbers are at their lowest and ahead of the key breeding time for a number of our native bird species but the exact timings are weather dependent.”

The pre-feed phase of the operation familiarises pest animals with the cereal baits, ahead of the baits containing 1080 (sodium fluoroacetate) being applied in the following weeks.

A satellite navigation system (GPS) and custom-designed bait applicators will be used to distribute bait (by helicopter) across the operational area.

Watercare chief operations officer Mark Bourne says the dams will be taken out of service ahead of the drop and will only be returned to service after a stringent water quality testing regime confirms no 1080 is detected in the water.

“Our dams in the Hunua Ranges are Auckland’s most important water sources, normally supplying about two thirds of Auckland’s water.

“As we’ve done in previous 1080 drops, we’ll be taking every precaution to protect the water stored in these dams.

“Auckland Council will ensure helicopters carrying bait will not fly over the reservoirs, and there will be setbacks from the margins of each reservoir. While the bait application is being carried out, the dams will be out of service and will only return once a comprehensive water sampling programme has been completed.”

The Hunua Ranges, Waharau and Whakatiwai regional parks and tracks within the neighbouring DOC reserves are closed while the pre-feed application is carried out and will reopen once it has been completed in a couple of days. When the toxic bait is applied, the parkland will remain closed to enable atrack clearance programme to be completed.

The operation is being undertaken by Auckland Council in partnership with DOC and is guided by the best practice use of 1080, set down by the government, and the conditions of permission granted to council by the Ministry of Health and Auckland Regional Public Health.