An honour and a privilege

It’s been my honour and privilege to be your Deputy Mayor. I won’t say it’s been perfect, but it has been a wonderful journey.

These words, addressed to Mayor Phil Goff at the last Governing Body meeting of the term, capture Bill Cashmore’s reflection on his time at Auckland Council and the essence of his valedictory speech.

Retiring from local government after four terms on Auckland Council, the last two as Deputy Mayor, Bill took the audience on a tour through the major achievements of the council since it was formed in 2010.

“I’m going to take you on a visual journey – it’s something we need to be proud of.

“Auckland’s population has grown by 300,000 since 2007 – that’s like absorbing all of the people living in Dunedin and Hamilton, in a very short time frame. And thanks to our Unitary Plan and consent processing, we’re doing our part to enable a mix of dwellings for Aucklanders to call home.

“We have achieved record levels of infrastructure investment, yet despite the growth in population, our operating costs have been managed prudently.

“We have future-proofed drinking water supply; are collecting and treating 409 million litres of wastewater daily; have increased the stormwater network to 6300km of pipes, culverts and connections – and that number is growing!

“We have a first class integrated public transport system and 7452kms of local roads under steadily improving management.

“Boy, would we hear about it if our teams weren’t out there collecting recycling material, food scraps and waste. I am very proud of our essential waste service which the team has engineered to deliver as close as we can get to zero waste already.”

Bill called out the brave and dedicated kaimahi in the council’s Animal Management team that put themselves in danger and face difficult situations every day. He noted that with increased intensification, the work of noise control officers – who respond to 60,000 complaints per year – will become more delicate.

“Our people also make sure our cities are a safe place to have a good time in, which is becoming increasingly challenging.

“We have invested in parks and playgrounds and our 800 much-loved sports fields that take 6 million bookings each year. Our libraries did us proud during COVID-19, meeting customer demand while keeping people safe. Our 42 pools teach confidence in the water and keep Aucklanders fit and active. We deliver amazing civic and public events.”

His presentation showed slide after slide of urban development projects that have been delivered across Tāmaki Makaurau over the last four terms including Hobsonville Point, Wynyard Quarter, Millwater, Federal Street, the award-winning Downtown Programme, Takutai Square, Freyberg Place, Northcote, Hurstmere Road where the dust has settled and the nay-sayers silenced (“It’s beautiful!”), Henderson planned, funded and ready to go, Avondale ready for growth, diverse and funky Ormiston and Panmure on the cusp of transformation.

“And my favourite part of town – Pukekohe. This area is evolving in front of our eyes and the young people are loving it. Although sometimes the ‘old crusties’, not so much!” he said, with a laugh.

“Manukau is a transformation in plain sight. The public are claiming these new places with enthusiasm and it’s fantastic to see.”

Bill’s support for transport and public transport projects is reflected in the pride he feels for work carried out by Auckland Transport, by the council, and in partnership with the government and other agencies.

“We must evolve to a future with substantially lower carbon emissions. The fabulous HOP card will get you everywhere; electric trains and buses will help reduce emissions; we have 300km of cycleways with more coming and our new transport interchanges are architectural wonders.

“Nine thousand daily ferry users get a mini cruise at the beginning and end of each day,” he said, celebrating the six new piers at Downtown and the Northcote Point wharf renewal.

“K Road is done and looks absolutely grand, the stunning Glen Innes to Tāmaki Drive shared path is Desley’s (Cr Simpson) pride and joy and the game changing City Rail Link has broken through to its next phase.

“A tunnel boring machine is not something you’d call sexy but watching Dame Whina Cooper break through was quite emotional, the CRL will transform the city centre.”

Back to his ‘favourite part of town’, Bill touched on environmental wins.

“In the Hunua Ranges, possums and rats are out and bird life is back. We took kauri dieback on, stepping into the ring to fight for kauri with a management programme and it’s working, proving science always wins.

“Agent K9 – or Tui the biosecurity dog – is sniffing out pests, we’re replanting our urban streets and leading the world with predictive Safeswim technology. Stunning kauri swamps are coming back to life and it’s cool!

“There is life coming back to the Hauraki Gulf as we re-seed mussels and work with iwi and Māori to do this work and turn the tide – I acknowledge the leadership of the Hauraki Gulf Forum in this area.

“We adopted the Transport Emissions Reduction Pathway – man, it’s ambitious but if we’re going to be effective in doing our bit to reduce carbon, this is what we have to do.”

Turning his attention to community and our community-focussed facilities, Bill highlighted new libraries and community centres, the work of volunteers and the significant community grant programmes that the council administers.

“The stunning Te Manawa Library is the pride of the west. We’ve seen the historic Ellen Melville Centre restored, a new community hub opened in the heart of Takanini, and an upgrade to the East Coast Bays Library.

“New play features at Northcote Point, Birkenhead, Westgate and Stanmore Bay, the Westhaven promenade, and the fabulous boardwalk at Maungawhau delivered by the Tūpuna Maunga Authority – have you been up there and taken a look? It’s beautiful.”

Bill also mentioned the portfolio of major events and cultural destinations delivered by Tātaki Auckland Unlimited, and hinted that he’d like to see another America’s Cup event hosted on the Waitematā.

Bringing his valedictory speech, and four terms at Auckland Council to a close, the Deputy Mayor and member for the Franklin ward said that local boards and councillors set direction and budget, but the staff make it happen.

“Your dedication, service and professionalism is aspirational.

“To my fellow elected members, it has been a privilege to work alongside you and I wish you all the best. To our Mayor Phil: you have my admiration and respect. It has been my honour and privilege to be your Deputy. I won’t say it’s been perfect, but it has been a wonderful journey.”

The Deputy Mayor also thanked his family and his wife Lyn. 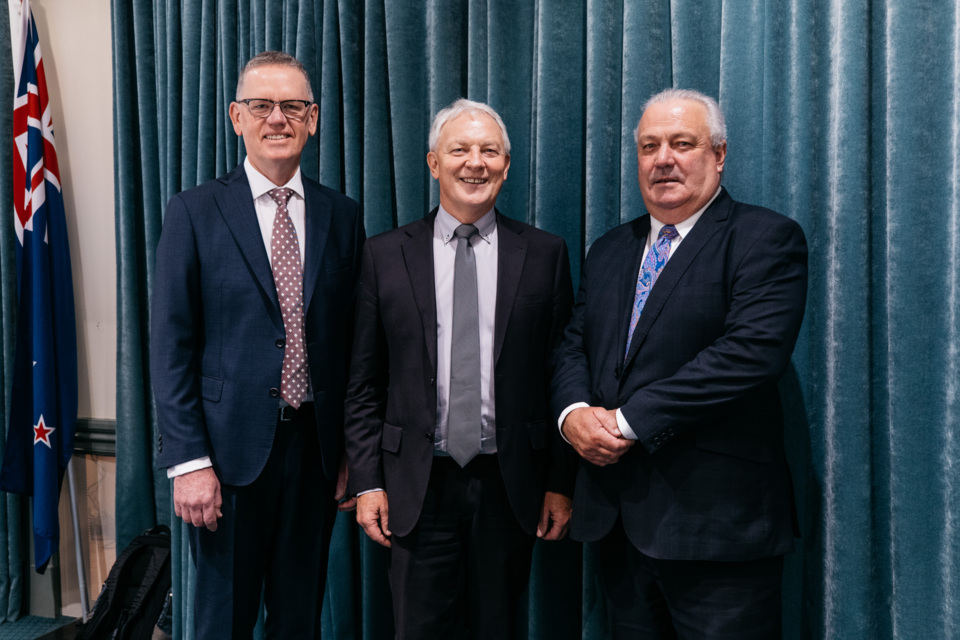 “That was a tour de force,” said Mayor Goff, speaking about his deputy’s valedictory speech and presentation. “Those pictures tell us why we’re here around this table and what makes this job worth everything we can put into it.”

“Bill Cashmore was the best deputy mayor I could have hoped for. I feel I’ve moved Bill to the left a little, but this is not about left or right, it is about what works for the city; belief in the city; and doing the right thing backed by evidence, advice and our own judgement.”

The valedictory speeches can be watched in full here.