Purpose and pride beyond the pier

Peter Relph is bringing his lively, fresh perspective to the workforce at Westhaven Marina.

While carving a pathway to paid employment, thanks to Eke Panuku Development Auckland’s Westhaven Marina and disability service provider Spectrum Care, the 44 year-old has also overcome his fear of the ocean and developed a new-found love of boats.

Rānui resident Peter is a welcome weekly presence at Westhaven, walking the boards at the 1800-plus berth marina to carry out surveillance, cleaning and registration duties, as well as getting out on the water to assist the marina’s dockmaster team. “It’s fun,” says Peter, who has gone from being fearful of the sea a year ago, to now identifying as an enthusiastic ‘boatie’.

“The confidence Peter has developed, not only in terms of being around the water, but also in learning new skills, is huge,” says Spectrum Care’s community facilitator Ojasvi Singh, known as ‘OJ’, who has worked alongside Peter in a supporting role for over three years.

She said, “The team down here at the marina is really supportive of Peter. Everyone treats him as a valued individual and an important member of the team with a role to play.

“It’s amazing the difference coming here each week has made to him, in so many ways.

"He is so keen to get down here – he’s always punctual and raring to go.”

Hopping onto boats to survey the marina is something OJ could never have imagined Peter doing in the past. “He was really scared of the water before. He hated boats. Now, he’s out there on the water helping to drive them. It’s incredible.”

Being at the helm of a boat is now Peter’s favourite activity. He’s down at the marina every Tuesday, assisting the operations team with a variety of activities.

“He’s building relationships as well as learning so many new skills,” says OJ. 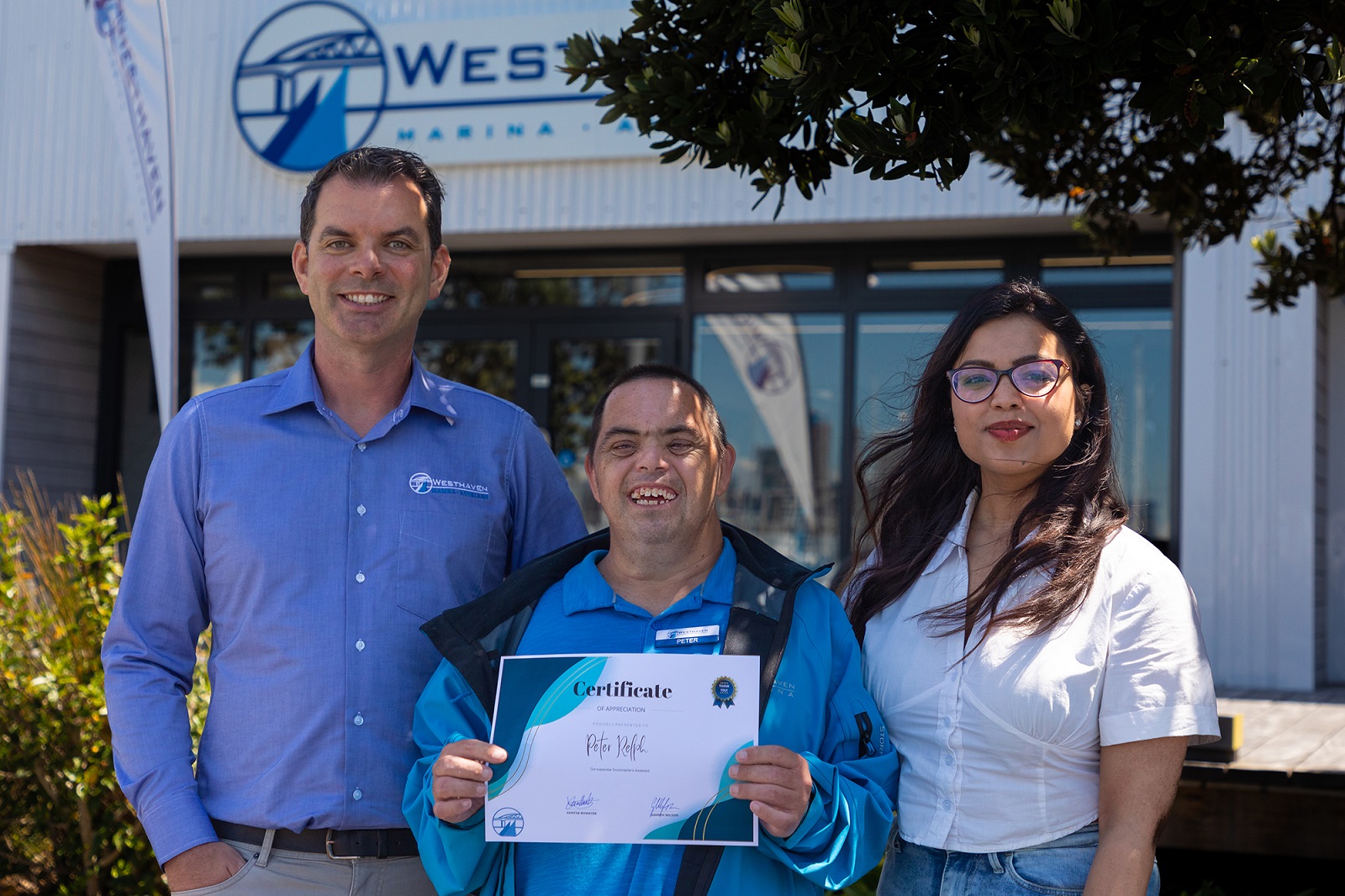 Peter helps maintain the marinas operational vessels, as well as cleaning walkways to maintain a tidy environment for the marina’s customers. He assists with mooring of vessels during berthing and with administration work such as dock walk reporting.

After gaining several NZ Certificate in Employment Skills qualifications through Unitec, Peter has worked as a car cleaner, supermarket trolley collector and meals on wheels assistant. Through Spectrum Care’s Aspirations Support service, Peter was introduced to the Westhaven crew over a year ago after an introduction from former marina logistics team leader Jayson Maud who is now an operations manager with Eke Panuku.

Jayson had previously established an initiative whereby a group of teenagers with special needs engaged in regular work experience at the marina to learn about the marine industry. When a son of one of the local boat owners approached him with the idea of providing work experience for a client of the disability service provider he worked for - Spectrum Care - Jayson set the wheels in motion.

“It was a match made in heaven,” says OJ. “As soon as they met Peter, it seemed this was a great fit. The relationship has gone from strength to strength, just like Peter’s experience and skill level. He has a five-year plan to get into paid employment and this partnership with Westhaven Marina is a key step in him achieving this goal.”

To celebrate his one-year anniversary at the marina in early November, Peter was presented with a certificate of appreciation in recognition of his role as ‘assistant dockmaster’ in a meeting attended by representatives from Spectrum Care and the entire marina team.

Westhaven Marina manager Gareth Wilson said, “Peter is a capable person who enjoys getting stuck into a variety of duties at the marina. We’re proud that we are helping him on his journey - he’s part of the family down here.”