Can I ride on the footpath? A guide to using Auckland’s paths, cycleways and bus lanes

Summer is finally here and it’s a popular time to get out the runners, bike, skateboard, scooter, or roller blades.

Auckland has a growing network of cycleways, shared paths, and bus lanes that mix in with our existing roads and footpaths.

With so many different types of road users using the same space, there is a real need for everyone to be considerate, slow down, and use common sense out there.

Below we have put together a guide on how to use these different spaces safely.

If you are on a bike, you are not required by law to use cycle lanes and you can ride on the road if you prefer.

Cycle lanes on a road

Cycle lanes are painted lanes along a road, designed to be used by people riding bikes. Cycle lane markings can include painted edge lines, bike symbols, ‘bike lane’ wording and may include green paint.

Separated Cycleways are dedicated paths for people using bikes. They’re separated from traffic and pedestrians. Cycleways may be one-way or two-way. Stay left and follow any ground markings.

Generally, these are wider than a footpath and are for everyone, whether you’re biking, scooting, skateboarding, pushing a pram or just out for a stroll. Look out for others, slow down, use a bell and pass with care. Popular examples of shared paths in Auckland are the Northwestern Path and Southern Path.

In segregated shared paths people riding bikes must stick to the side of the path marked for bikes.

The government is currently reviewing the rules, but currently it’s illegal to ride a cycle on footpaths unless you’re delivering mail or it’s a small kids bike (wheel diameter less than 355 millimetres). As well as people walking, footpaths can be used by people on push scooters, e-scooters, skates, skateboards, and other similar ways of getting around.

Bus lanes and bus-only lanes have signs or markings to show that they can only be used by special kinds of vehicles.

Bus lanes have a BUS LANE road marking and sign. You can ride a bike in bus lanes. 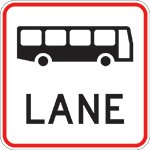 Bus-only lanes have a BUS ONLY LANE road marking and sign. You must not ride a bike in bus-only lanes.

Bus lanes and bus-only lanes apply all the time unless there’s a sign saying what days and times they apply. Other vehicles may use these lanes outside these days and times.

Transit lanes have signs or markings to show that they can only be used by vehicles with passengers.

Bikes, buses, shuttles, taxis, motorbikes and mopeds can use transit lanes, even if they don’t have passengers. Transit lanes apply all the time unless there’s a sign saying what days and times they apply.