People who live and work in northwest Auckland will soon be able to enjoy faster and more frequent bus services thanks to the Northwest Busway Improvements project.

Transport Minister Michael Wood and Mayor Phil Goff marked the start of works today, by turning the first sod of dirt along with local councillors, local board members and representatives from Waka Kotahi and Auckland Transport (AT).

Mayor Phil Goff says the project will provide significant benefits to communities in the northwest of the city.

“This work helps cater to the significant growth we have seen over the last decade, which is forecast to continue with 100,000 more people expected to live in the area over the next 30 years.

“By extending the bus shoulders, Aucklanders travelling to and from the northwest will enjoy faster and more reliable journey times, while new bus stops at the Te Atatū and Lincoln Road interchanges will make services more accessible, creating greater transport choice.

“This will be further enhanced with a high-quality new bus station set to be constructed in Westgate from 2023.

“All of these improvements add up to a much more efficient, reliable and convenient public transport alternative to private cars, which will reduce congestion and carbon emissions and support badly needed housing development along the SH16 corridor,” Phil Goff says. 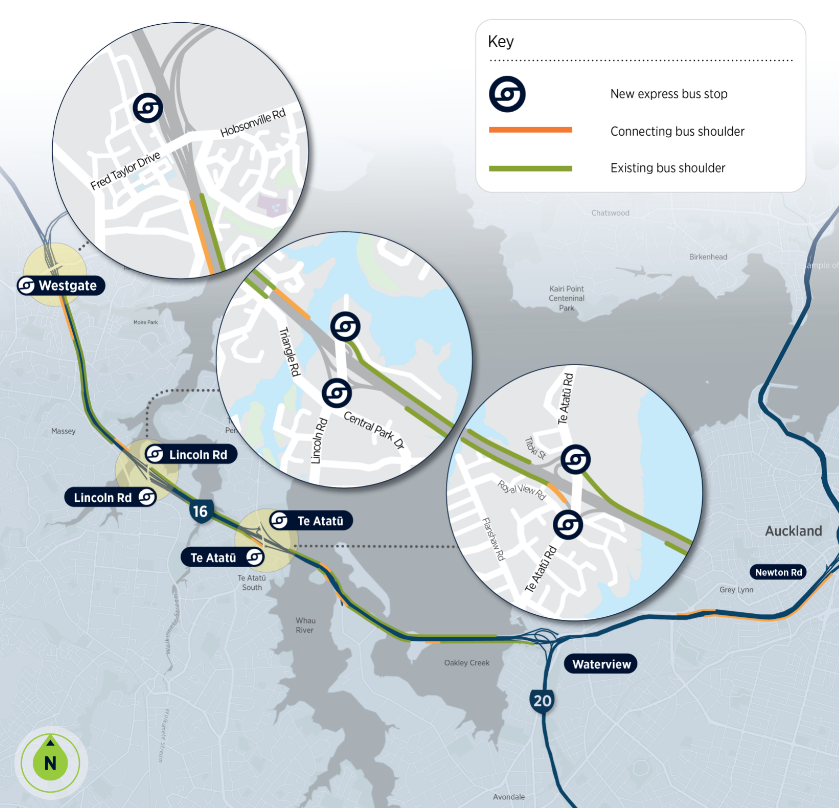 Deputy Chair of AT’s Board, Wayne Donnelly, says he is pleased to see construction commence on this long-promised project.

“This is a big step in the right direction to provide sustainable transport options for people in the northwest.”

New bus stops near the Te Atatū and Lincoln road off-ramps on SH16 are the first phase of the project, which will later include a major bus station at Westgate.

“These bus stops at Te Atatū and Lincoln Road will enable commuters to connect between local services and the northwestern express services, which will run along the motorway between Westgate and the city centre via these two interchanges.”

“There has been keen community interest in this project and our consultation on the plan showed almost 75 per cent of the more than 500 respondents would be more likely to use the bus with these improvements.”

The existing bus shoulders will also be extended on the Northwestern Motorway between Westgate and Newton Road, to fill the gaps and provide a more reliable and quicker journey for people taking the bus into the city centre.

“By using the motorway shoulders for buses, we are moving more people and reducing the number of cars on the road. The existing traffic lanes on the motorway will remain the same.” 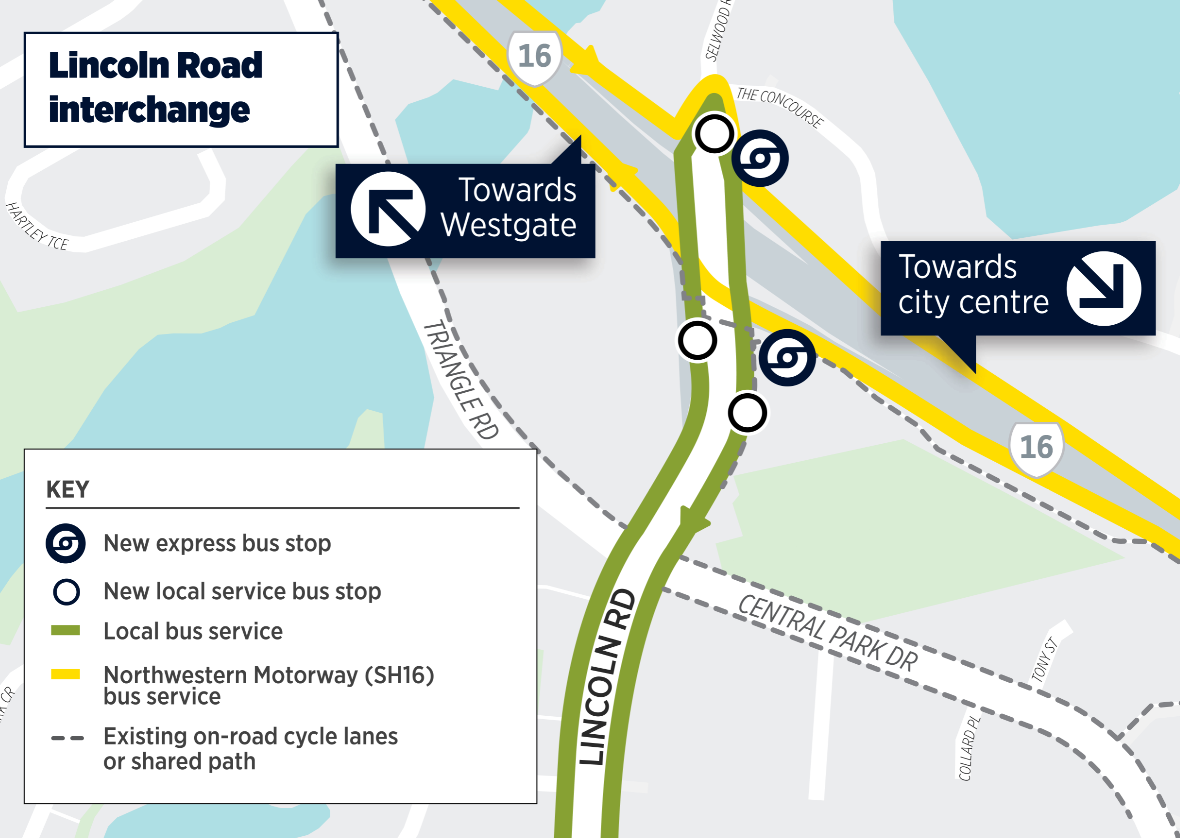 Mr Donnelly says to reduce the impact on traffic flow, including the current bus system, work will be carefully planned and staggered over a 14-month construction period.

“We anticipate that most, if not all of the work, can be carried out without impacting peak traffic and will be designed to have a minimal effect on drivers and people travelling on foot and by bike, while also ensuring the safety of our crew and all road users.”

Waitākere Councillor Linda Cooper says west Aucklanders have been crying out for this project for a long time.

“We want these improved bus services and those of us who live in the west will use the buses. We desperately need a high quality bus service for the peninsula and the growth areas in the north west.

“This is very much a case of build it and the people will use it.” 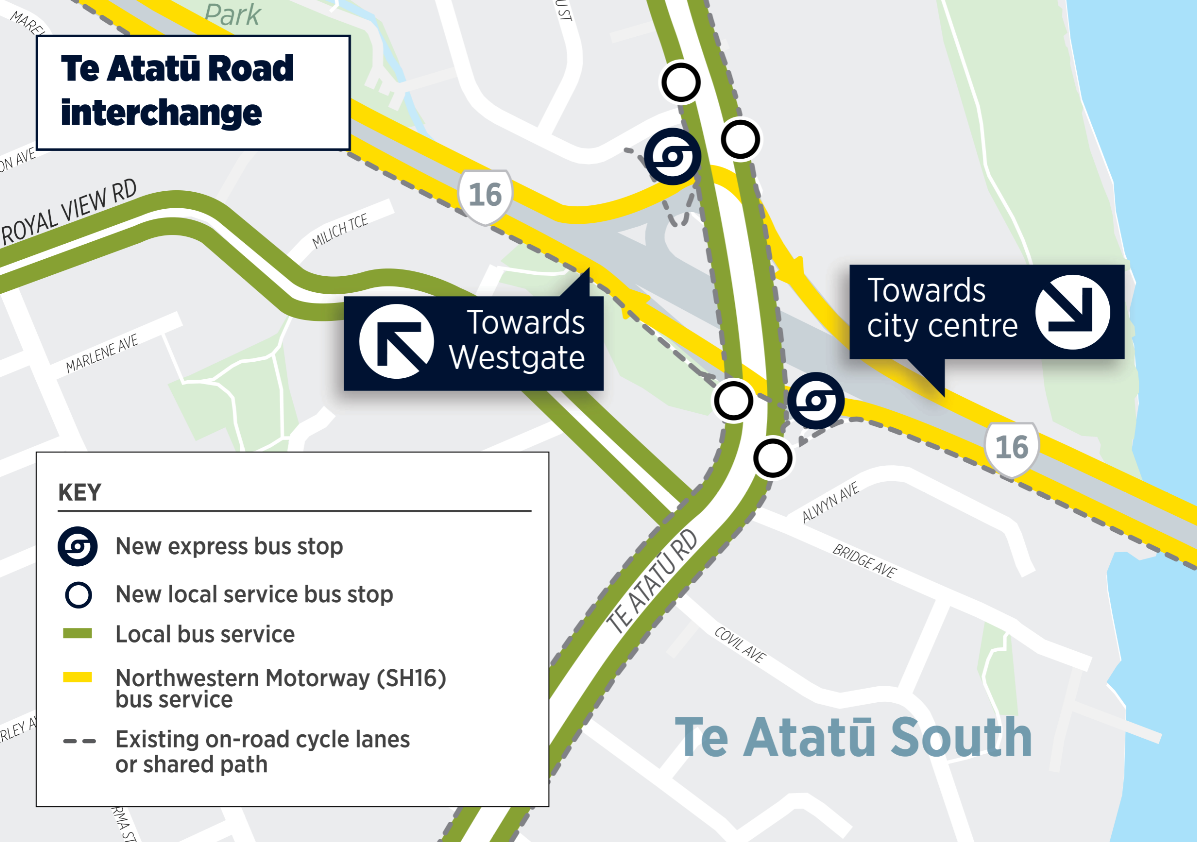 The project is scheduled to be completed in late 2022, at which time express bus services will commence. AT will also look at improving the local bus schedules and routes to serve these new bus interchanges.

The project is being funded in part by the Government to help New Zealand’s economic recovery and create a future pipeline of work. The COVID Response and Recovery Fund has provided $50 million of the $100 million project to support this work.

For more information about the project go to AT.govt.nz/projects-roadworks/northwestern-bus-improvements