Beach Haven Recreation Wharf is back in action following a major upgrade to make it safer and stronger.

“The new pontoon at the end of the wharf will be really popular with swimmers in particular.”

The work earlier this year and focused on making the wharf safer and stronger for users as the seaward portion of the structure had deteriorated and the loading platforms had to be closed in 2018.

The project involved demolishing and replacing a section of the existing structure, encasing the timber piles to make them stronger and last longer, new decking, handrail and seat, and a new gangway and concrete pontoon.

Located at the end of Beach Haven Road in Hilders Park, it was originally known as Hellyer’s Creek Wharf after it was built in 1887. Later it became known as the Birkdale wharf, but since 1946 has been known by its current name of the Beach Haven Recreation Wharf.

“This wharf is very much loved by the community so I am thrilled to have the works finished and that it is now much stronger and will be able to be enjoyed for generations to come.”

The recreational wharf at the end of Beach Haven Road was originally known as Hellyer’s Creek Wharf after it was built in 1887. It was later known as the Birkdale wharf, but since 1946 has been known by its current name of the Beach Haven wharf.

The wharf is a recreational facility rather than a commercial one, reinforced with the building of the new commuter wharf in 2013. The wharf is generally used for light activities such as fishing, swimming and minor loading for small recreational vessels and servicing of the nearby swing mooring area.

The current wharf is a timber structure some 40 metres long with a 2-metre-wide trunk that leads to an approximately 4m x 4m head/viewing platform at the outer end. Two loading platforms with stairs run off the southern end of the viewing platform.

The current design of the balustrade is repeated on both sides of the walkway and encloses the wharf with only an opening to allow access down to the loading platforms/landings used for recreational boat users and swimmers.

The wharf was rebuilt in 1937 after a fire, and then completely reconstructed in 2000 including framing, decking and railings. There appears to be no original fabric remaining from the earlier wharf.

The wharf’s heritage values are closely associated with the historic use of this site as there has been continuously a wharf here since 1887. 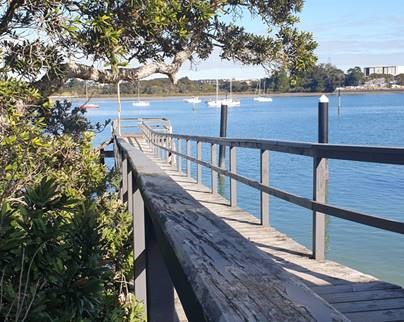 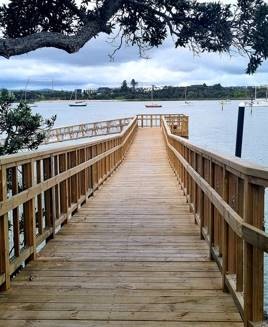