Auckland’s Harbour Bridge will, this Friday, be transformed into a spectacular celebration of our marine environment, with an exciting, engaging light and audio story in honour of WWF-New Zealand’s Whale Tales public art trail - opening throughout Tāmaki Makaurau Auckland on 24 January 2022.

"It is fantastic to see Vector Lights get behind the Whale Tales public art trail. This trail is going to delight and enthrall whānau / ‘aiga all summer and to see it kick off with a stunning light show on the Harbour Bridge is perfect,” says Councillor Alf Filipaina, Chair of Auckland Council’s Parks, Arts, Community and Events Committee.

“Vector Lights is all about sustainability and the whale tales trail is highlighting the importance of sustaining a healthy population of the Bryde’s Whale – Tīkapa Moana’s resident whale species.

“I encourage everyone to enjoy the show, explore the art trail around the region and learn what role we all can play in protecting this amazing living taonga.”

Powered by a mix of leading technology, including solar, battery, and peer-to-peer systems, Vector Lights will transform the Waitematā Harbour ahead of the launch of Whale Tales 2022, the incredible outdoors art trail inspired by the Hauraki Gulf’s resident whale, the Bryde’s.

Celebrating Aotearoa New Zealand, art, and marine conservation, Whale Tales is running over the next 12 weeks in Auckland. There are 80 Tail sculptures designed by 80 artists, which will be auctioned later in the year to raise funds for WWF-New Zealand and their vital work for our oceans, and in particular the Hauraki Gulf and the Bryde’s whale.

Pronounced Broo-dus, Bryde’s whales are found in the coastal waters around the Tīkapa Moana / Te Moananui ā Toi / Hauraki Gulf. It is one of only three places in the world to have a resident, year-round, population. Unfortunately, they’re now nationally critical, with only 135 remaining.

“Bryde’s whales, our huge, beautiful local residents, are our forgotten whale. They are the largest species to call the Hauraki Gulf home but climate change, unsustainable fishing practises, plastic pollution, and other human activities are threatening their survival, and we are at risk of losing them forever from our waters. These whales are an indicator of ocean health, if our whale populations are healthy and thriving, it is a sign our ocean is also healthy and thriving,” says WWF-New Zealand’s CEO Livia Esterhazy. 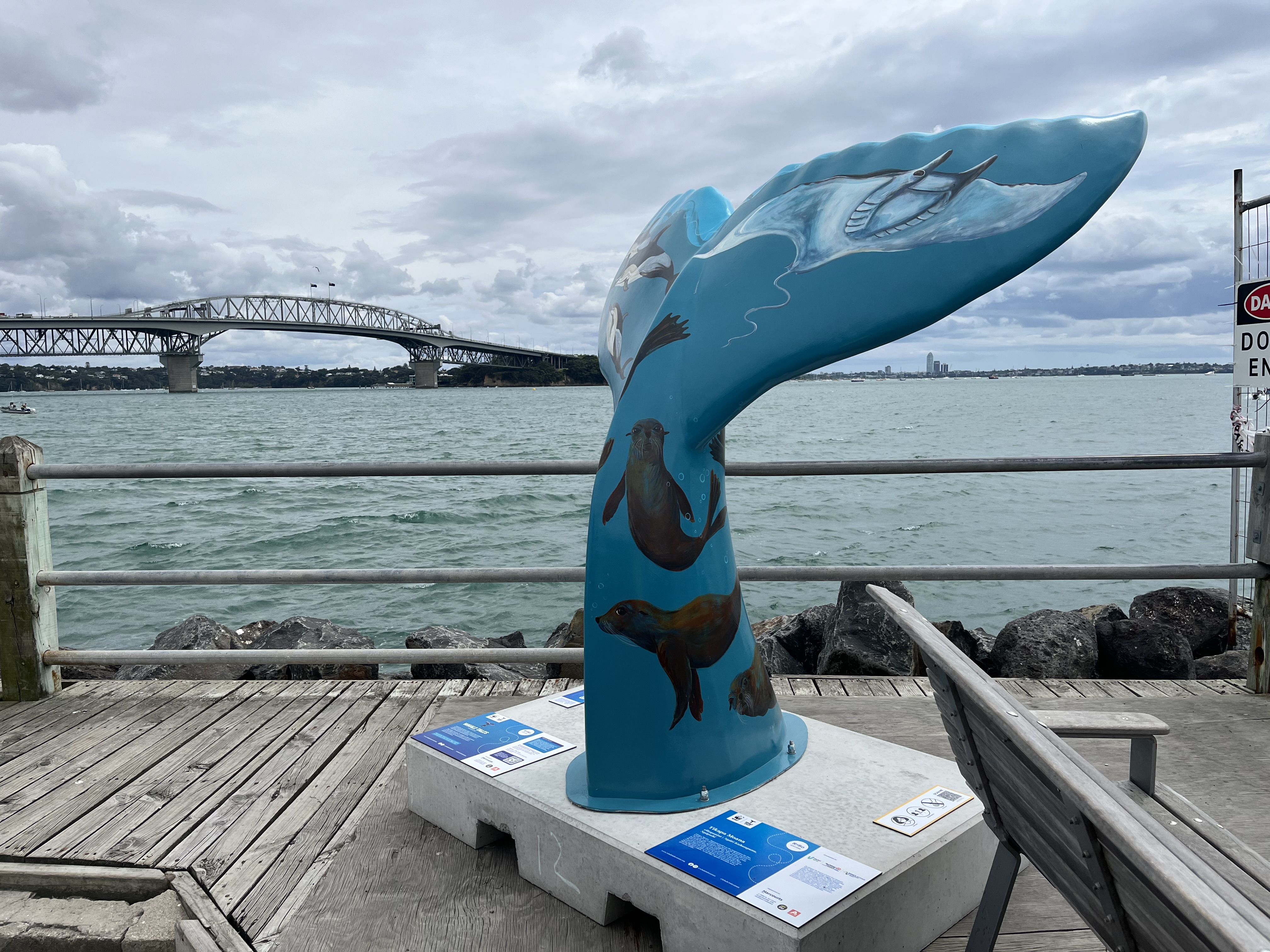 With the spotlight on Bryde’s whales, everyone who participates in the Whale Tales journey and learns about these magnificent creatures will be supporting our mahi to save them and help restore the magically diverse Hauraki Gulf.

“We are so incredibly proud and honoured to work with Vector, Auckland Council, Auckland Unlimited, and Waka Kotahi to bring the tale of the Bryde’s whale to life across the Auckland Harbour Bridge. As the heart of the Gulf, it is fantastic to see it become part of the heart of the city. If ever a species deserved to have its name in lights, it's this one. We are so excited for everyone to see this project come to life,” continues Esterhazy.

“Vector Lights is once again lighting up the Waitematā Harbour with clean energy technology to celebrate Te Mauri o Waitematā and all of the species that call it home. The story we present symbolically illustrates the waka that travelled into the harbour, the mana whenua of Tāmaki Makaurau, the multicultural connections of our city, and the Bryde’s whale. We are thrilled to be a part of WWF-New Zealand’s Whale Tales,” says Matt Eastwood, Vector’s Group Manager of Marketing

Ataahua Papa, the artist behind the Vector Lights for Whale Tales show, and Lizzie Thomas, the artist who designed the Tail sponsored by Vector Lights, join other incredible artists from around Aotearoa, including Otis Frizzell, Gregory O'Brien, Cora Allan Wickliffe, Wētā Workshop and Jeff Thomson in bringing Whale Tales to life.

From 21-26 January there will be seven shows a night running every 30 minutes from 9pm until midnight.

To watch the shows with audio, listen here. An audio link will appear when the show is about to start.

The best spots to catch the Vector Lights show are:

For more information about Whale Tales, download the Whale Tales 2022 app. There you will find the trail map, sponsor deals, activities, and a whole lot more. Available via the App Store or Google Play.