So you’ve bought the bike, got the right gear and have been enjoying the freedom of exploring cycle pathways across Tāmaki Makaurau or avoiding traffic congestion by cycling to work. Now, though, it’s time for some basic bike maintenance. Where to go?

Community-run bike hubs, supported by Auckland Transport (AT), could well be the answer. Several not-for-profit neighbourhood groups and trusts offer fix-it clinics across the region, which are run by community volunteers and provide services like free use of tools and advice on basic maintenance, as well as restoring and safety-checking second-hand bikes for sale.

Cycling – along with walking – is one of the most sustainable forms of transport, but bike hubs go further toward this goal by utilising used and new bike parts and accessories when volunteers are restoring second-hand bikes.

Bike hubs are receiving a boost thanks to a new $3 million three-year project, delivered by AT as one of the climate action initiatives agreed in Auckland Council’s 10-year budget. Ngā Tiriti Ngangahau – The Vibrant Streets Programme includes funding to build better bike hubs – and more of them – as part of a new AT-owned concept for community-run bike hubs across the region.

Ben Mansfield, Senior Travel Demand Planner at AT, hopes the project will lead to nine new hubs, with the first opening before summer. A keen cyclist, he says the hubs are an ideal place to visit for practical help and advice on basic repairs, but more than that, they foster a sense of connection and community among bike riders by organising local events and activities. 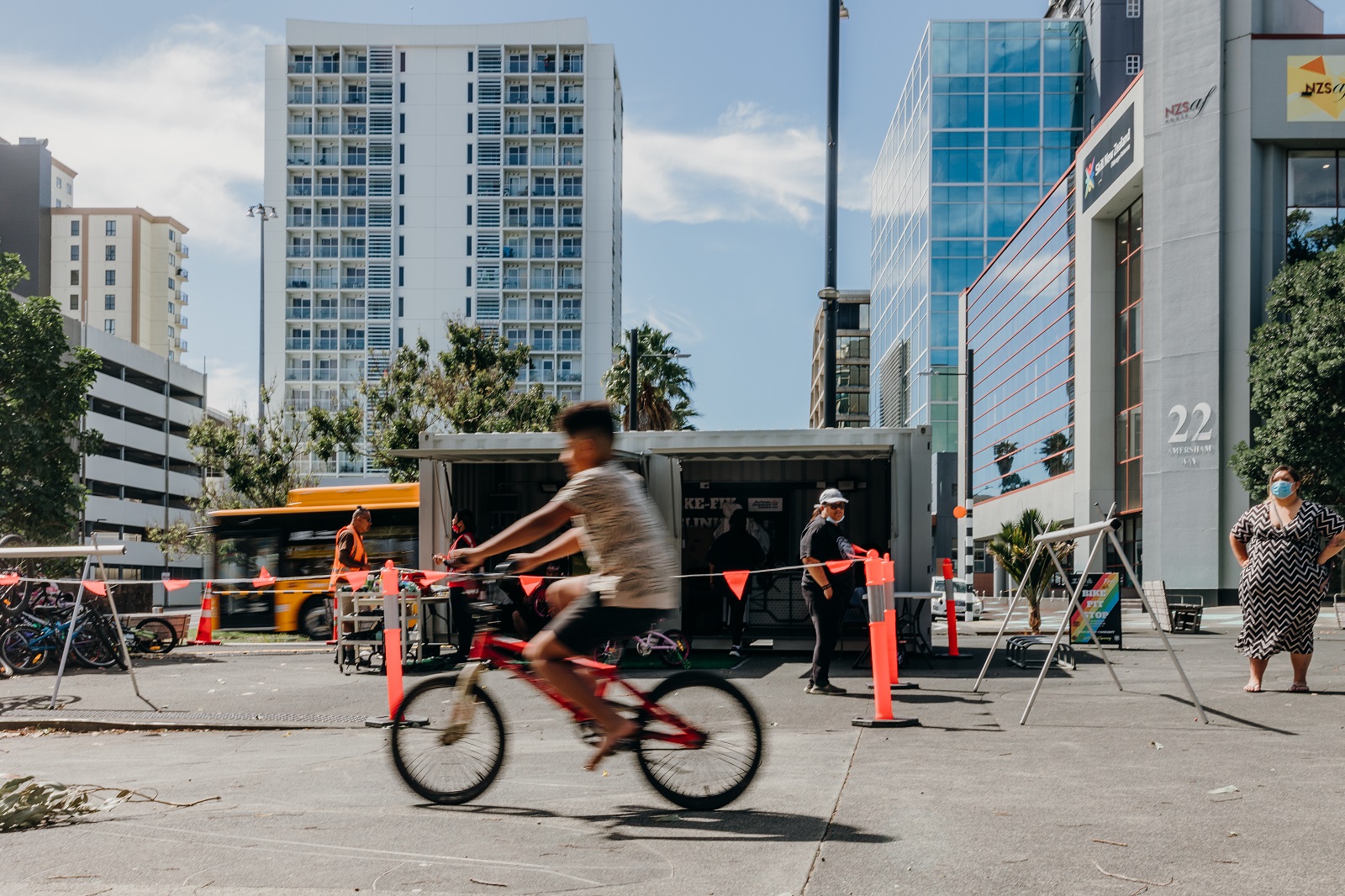 As well as offering assistance and support, the hubs often accept donated bikes and parts that can be restored and sold at a low cost or donated to those in need. Bikes that are too old to be repaired are often stripped for useable parts, and sometimes these go into the construction of eye-catching novelty bikes which are wheeled out at the events and activations centred on or around the hubs.

If a certified mechanical repair is needed, or it involves more than basic checks on an e-bike (electric bike), volunteers know what local services are available since they’re based in the community. Volunteers can also provide safe cycling advice and guidance.

In keeping with sustainability goals, most hubs are housed in repurposed shipping containers on land owned by AT, Auckland Council or Eke Panuku Development Auckland. The newest of these opened in April at Queens Wharf, run by EcoMatters Environment Trust’s Bike Hubs. EcoMatters already had hubs in New Lynn, Henderson and Glen Innes, but demand was growing for one in the central city.

The not-for-profit has some impressive statistics that show its success. Since opening their first bike hub in 2017, they’ve had more than 30,000 visitors and fixed more than 10,000 bikes, going on to win the Travelwise Choices Awards 2020 and the Shifting the Dial category in the On the Go Awards 2021.

Find out more about cycling groups near you on the Auckland Transport website.