Auckland Council has formally adopted the Annual Budget 2022/23, locking in a bold billion-dollar package to combat the climate crisis, providing for continued high levels of investment in essential services and infrastructure in Auckland, and reaffirming the council’s commitment to delivering value for money, including a saving target of $90 million over the coming 12 months.

Mayor Goff says the climate action budget lays the foundations needed for Auckland to reach its climate objectives and deliver a positive legacy for future generations.

“In 2019, Auckland Council voted unanimously to declare a Climate Emergency, and the following year we adopted Te Tāruke-ā-Tāwhiri: Auckland's Climate Plan. This Budget gives effect to those actions by guaranteeing ringfenced funding to cut emissions, including a half-billion-dollar boost to deliver new and more frequent bus services across the region.

“With over 40 per cent of Auckland’s emissions coming from transport, the fastest and most effective way to reduce emissions is by encouraging mode shift to public transport and active modes,” he says.

The climate action budget will enable $600 million of new investment in bus services, including ten new frequent bus routes in the south, west and east of the city, an extension to the frequent service on the Northern Express up to Hibiscus Coast Station, and improvements to nearly 70 existing bus routes region wide.

“Hundreds of millions of dollars more will also go towards procuring new electric and low-emissions ferries and 79 new electric or hydrogen buses, completing key links in the city’s cycling network, and delivering 35km of improved footpaths and pedestrian crossings to improve walkability.

“We will also build on the success of the Mayor’s Million Trees programme by planting thousands of 1m-1.5m native trees on streets, in parks and in road reserves, providing more green space in areas that need it most, particularly in the south of our city,” Mayor Goff says.

Funded by a Climate Action Targeted Rate, the new climate package will directly generate $574 million over 10 years and seek to leverage a further $482 million in co-funding from central government and other sources. For a person with a median-value home worth $1.2 million, the CATR will represent a contribution of around $1.12 per week.

“This is a relatively small sum that will provide significant benefits to all Aucklanders by reducing emissions and pollution, easing congestion, and making the city a greener, more sustainable place to live,” says Mayor Goff.

“This budget puts the council in a good position to address further adverse impacts such as rising inflation and interest rates, and the persistent impact of COVID-19,” says Mayor Goff.

“We’ve made some tough budget decisions to ensure the council continues to carefully manage its finances through challenging times, while also maintaining the services and facilities Aucklanders value and rely on.”

The 2022/2023 budget builds on the sensible management of the council’s books in recent years, with the council having capacity to prudently use debt to fund capital investment. At the same time, the council continues to be committed to a savings target of $90 million for 2022/2023, with around $52 million of these ongoing savings already achieved.

Ongoing elements of the budget include looking at opportunities to deliver $30 million of expenditure reductions from 2023/2024, and approximately $50 million of additional reductions from 2024/2025, though any final decisions on this will be for a future council. Part of this will likely include the continuation of the work that started with the Recovery Budget to look at delivering community services differently to better meet the current and future needs of our diverse communities.

Consistent with the 10-year Budget 2021-2031, our Annual Budget 2022/2023 includes an average general rate increase for existing ratepayers of 3.5 per cent. Factoring in the CATR and waste management rates, the total average increase across all ratepayer groups will be 5.6 per cent.

The Report of the Local Government Rates Inquiry indicates the affordability of rates as no more than 5 per cent of a household’s income. The council’s rates, water and wastewater charges for 2022/2023 sit around 3.37 per cent to 3.62 per cent.

The council is taking a staged approach to balancing both the 2022/2023 budget and the longer-term. Budget measures for 2022/2023 include utilising the Better Off funding provided by the government as part of its mandatory Three Waters reform programme, deferring some capital expenditure while maintaining critical and high-risk projects and projects that strongly support growth and climate action, and some additional borrowing to fund capital projects while continuing to work towards more long-term solutions for 2023/2024 onwards.

We are increasing local board responsibilities for decisions over local community services, such as local parks, libraries, pools, recreation centres, community halls and events that support strong Auckland communities.

Local boards having a greater role in service decisions enables better representation of local views and priorities. The changes expand local board decision-making powers by:

Individual agreements for each of the 21 Local Boards will be available to view in Volume 2 of the 2022/2023 Annual Budget.

Over the next three years we will continue to standardise waste services and charges across Auckland and move to a region-wide rates-funded rubbish collection service with a choice of three bin sizes to accommodate different household needs.

Standardised services and charges across the region will mean everyone with the same sized bin pays the same rate no matter where they live. For most households, the rates-based service will be cheaper than the currently planned pay-as-you-throw (PAYT) model with prepaid bin tags or bags. We will also standardise which properties can opt out of council waste services and charges. 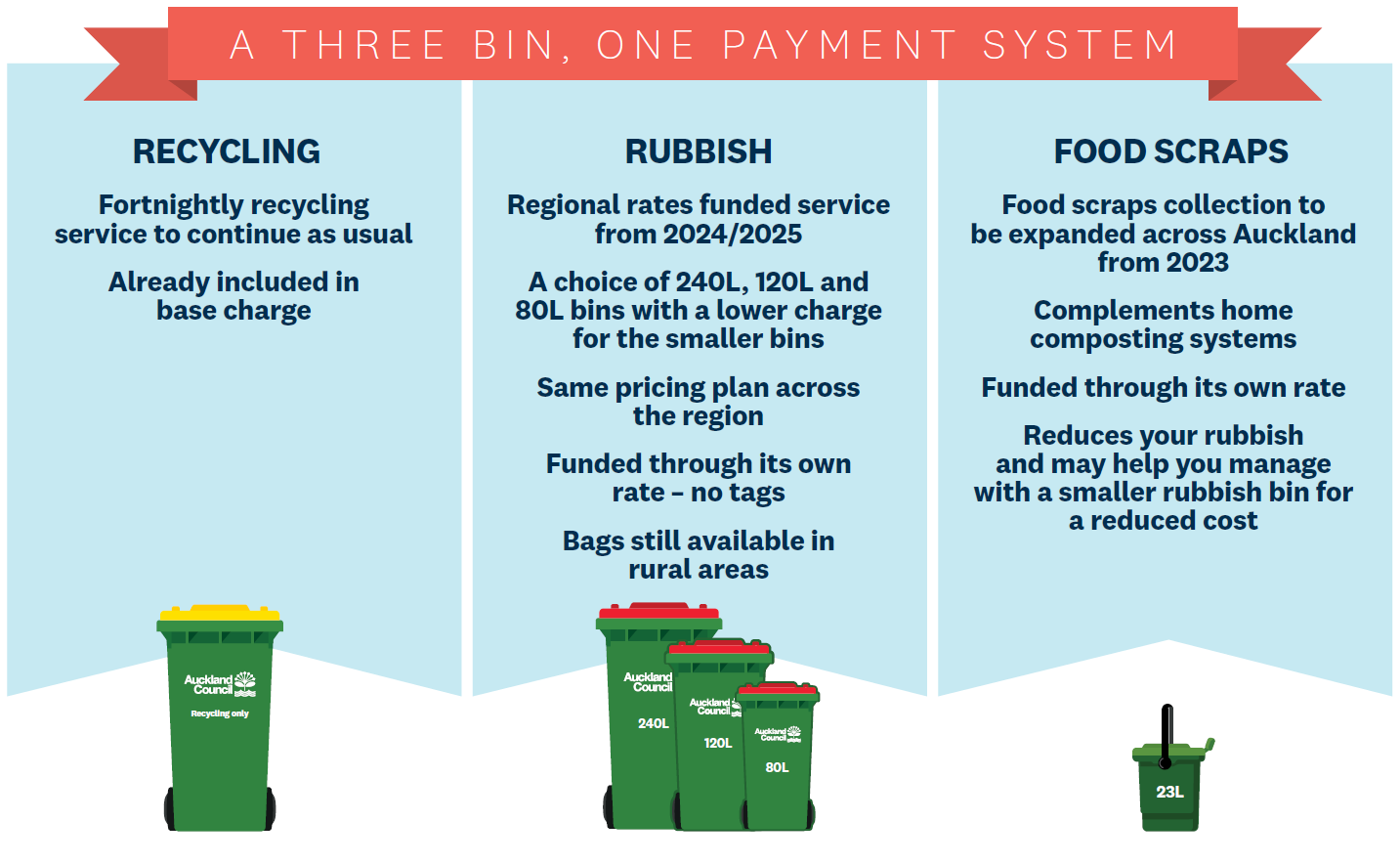 The full 2022/2023 Annual Budget will be available on the Auckland Council website over the coming days. In the meantime, more information can be found at infocouncil.govt.nz