By mid-November when an upgraded Queen Street opens, Aucklanders will discover the city centre’s new Waihorotiu path, an innovative multi-use path next to the road carriageway for people walking or travelling at a leisurely pace on wheels.

This month Aucklanders will see this path come together between Aotea Square and Shortland Street, with an innovative wayfinding system with safety cues layered into the experience.

Safety cues include wayfinding patterns, placement of planting, textural changes and signage. The elements will work together to guide slow riders safely along the path while providing a buffer of protection for shoppers and others who walk along the footpath and cross the street.

The first of the wayfinding patterns were applied outside The Civic last week, developed with Ngāti Whātua Ōrākei mana whenua design studio, Kaunuku.

Jenny Larking, Head of City Centre Programmes at Auckland Council, explains the role of the wayfinding patterns that Aucklanders will see along the path.

“The approach is twofold: the system of ground markings along our new Waihorotiu path carries cultural expression of the Waihorotiu valley narrative, developed by the project’s mana whenua partners, and also safety measures for effective operation of the path.

“Supporting the other wayfinding measures we have built into the design, the markings help define the area of the multi-use path and provide visual delineation, guiding user behaviour at key locations such as pedestrian crossings and bus boarding areas,” she says. 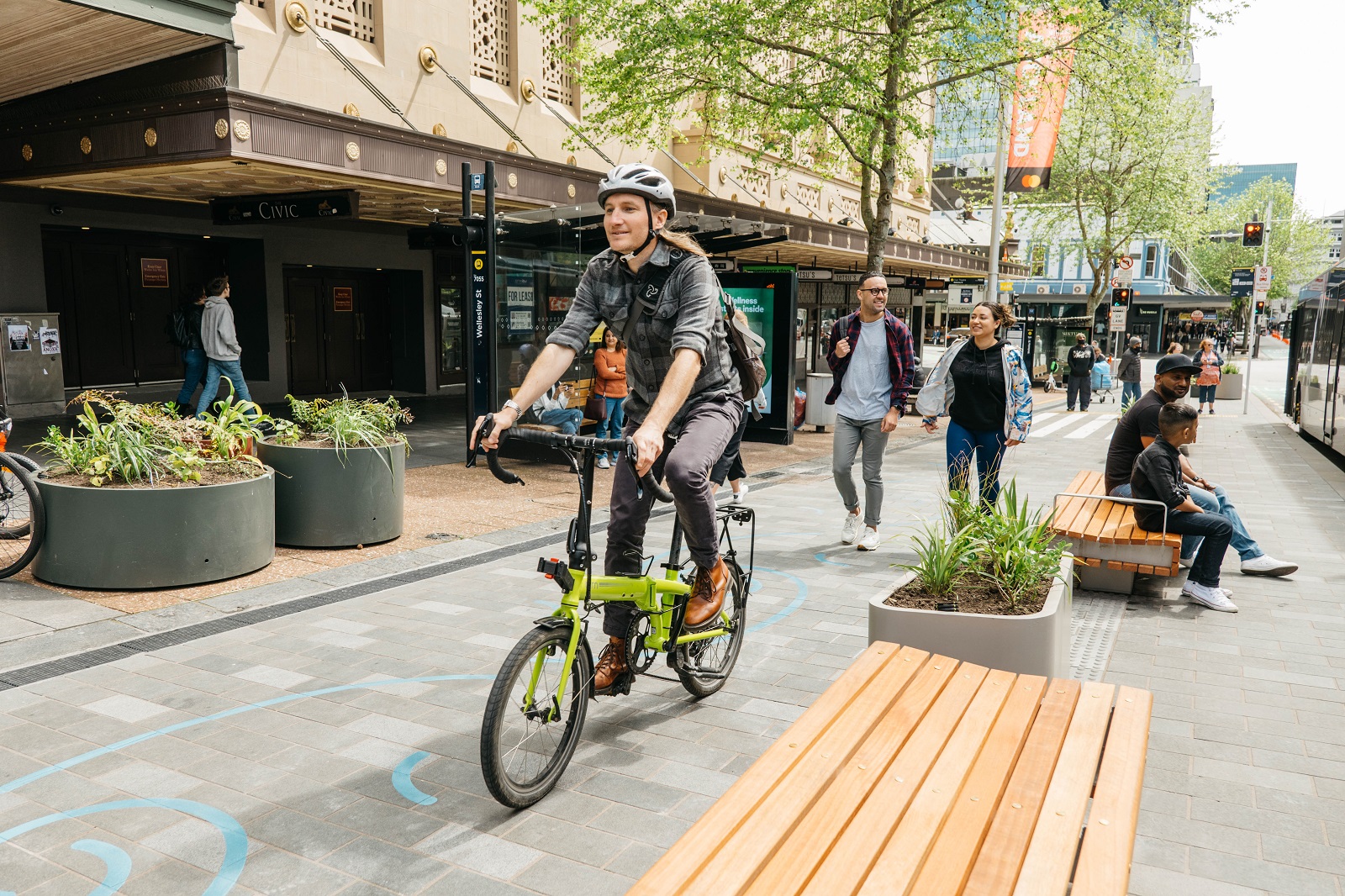 The multi-use path has been named ‘Waihorotiu path’ to reflect the important waterways that once carved natural pathways across the whenua (land) where the present-day city centre now stands. The name will daylight knowledge about the awa (river) that continues to flow underneath Queen Street.

The ground markings add a layer of behavioural information to the path surface. Inspired by the Waihorotiu, a theme of flow and connection is adopted to add character to the path while indicating that the path is an active zone, differentiated from the pedestrian-only footpath.

Aucklanders will see three forms of pattern language on the surface of the path that signals their different uses:

Wavelets connect the path experience and intensify around crossing points, creating a gentle reminder for surrounding people to take caution.

Adjacent to loading zones, flowing arced shapes are reminiscent of large boulders that slow the flow of water.

Inspired by speed and swiftness, this motif indicates areas of fewer obstructions. 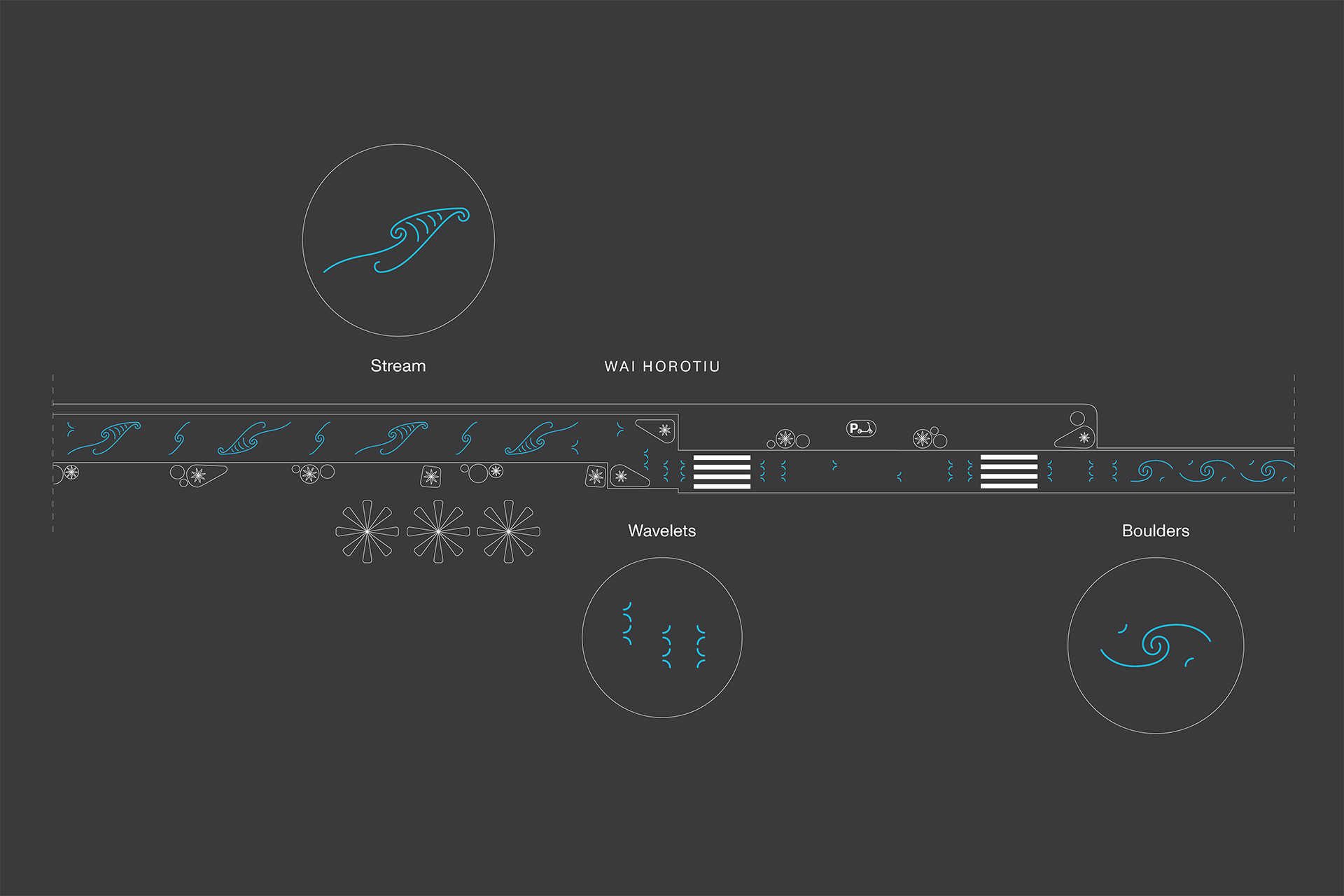 Kaunuku designer Tahua Pihema explains that the pattern language elevates mana whenua aspirations to see themselves reflected in their taiao (natural environment) which is Tāmaki.

“The underpinning narrative of the patterns encompasses mauri tau, mauri tu, and mauri ora, which can be observed in the movement of wai. The ira tangata embodies these three different physical states across the pathway and are indicated by each tohu, conveying the functionality of space and place,” she says.

Mana whenua have also contributed to the design through native planting and bilingual information signage for pedestrians and those using active modes. Together with the ground markings, collaboration with tangata whenua has helped create an attractive environment and meaningful experience for customers.

Auckland Council is reshaping Waihorotiu Queen Street in line with the transformational moves described in the City Centre Masterplan (CCMP). They include positive Māori outcomes, transit orientated developments, green parks and streets, and improved physical connections between the universities, the city centre and city fringe.

To find out more about this project visit ProgressAKL.