A New Lynn construction site has successfully diverted an impressive 90 per cent-plus of its construction and demolition waste from landfill.

Auckland Council worked with Unitec’s Environmental Solutions Research Centre (ESRC) and developer Benton Ltd on the project, with a focus on recycling plastics as they make up a large volume of the waste that goes to landfill.

Auckland Council Senior Waste Planning Advisor Mark Roberts says it is a great result.
“This example strongly demonstrates that builders and demolition companies can stop a huge amount of waste going to landfill.

"The challenge that lies ahead is educating the wider industry about how to achieve significant reductions themselves and embrace the change. It is heartening to see that suppliers are also beginning to play their part by repurposing waste generated from products they sell. It all helps.”

Change is definitely needed with construction and demolition sites currently sending huge amounts to landfill; 568,935 tonnes a year - twice that of all household refuse collected throughout Auckland.

This project with ESRC began with the removal of a house in 2021 that was repurposed by Junk Run. Then drainage and earthworks began on site to prepare for construction of an eight-unit residential townhouse complex. To prepare the site, staff, and subcontractors for the waste sorting, the ESRC team delivered training to introduce the ‘how to’ of plastics sorting.

ESRC Director Dr Terri-Ann Berry says, “It was incredible how much plastic waste was produced, especially soft plastics. It was also amazing to see how quickly and efficiently Caleb and the boys on site separated their waste streams and how justifiably proud they were at the end of the build.” 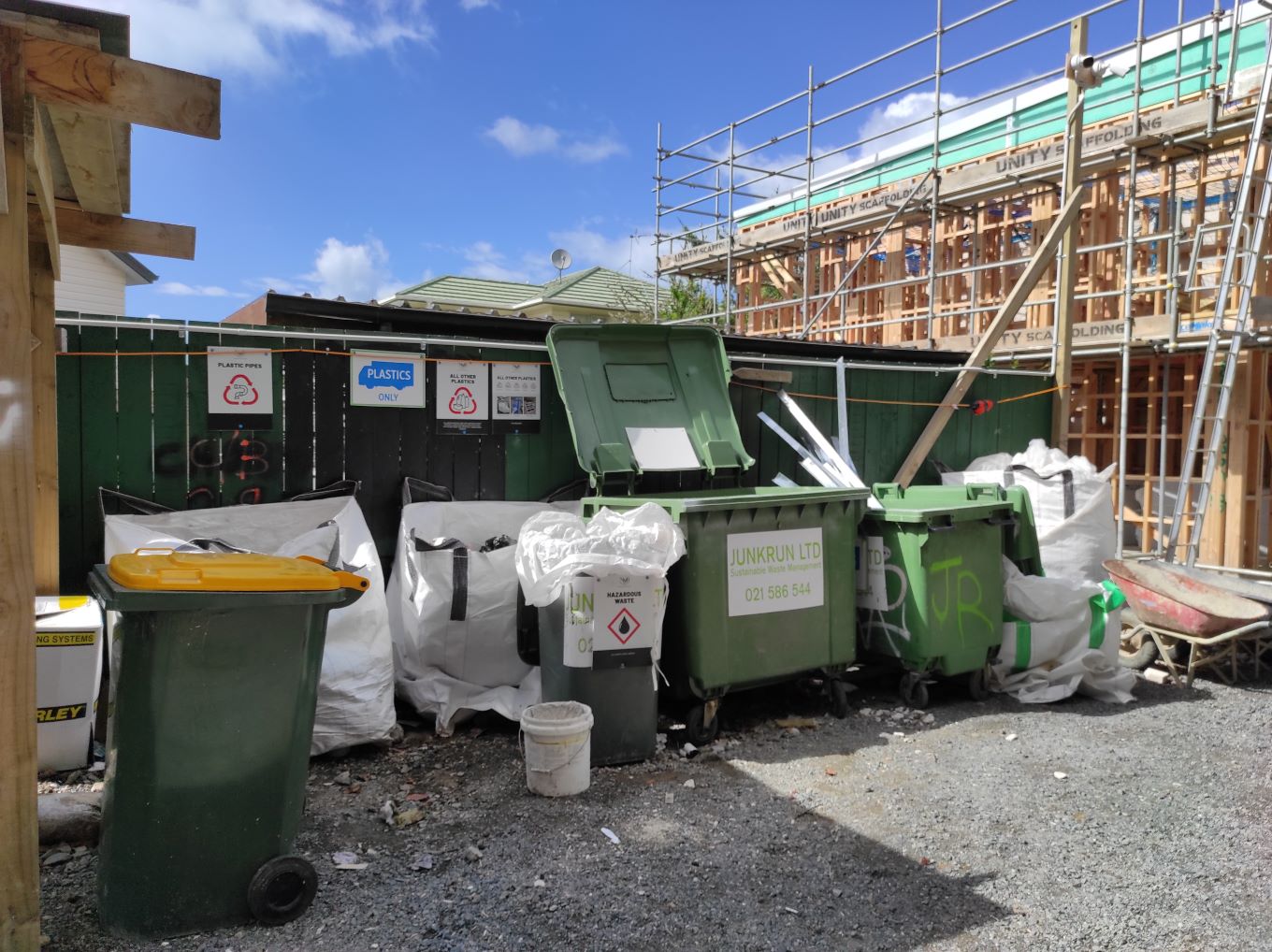 A total of 22,434 kg of waste was collected during construction and audited by Junk Run and ESRC, of which 18,442 kg was recycled or repurposed. Plastic waste made up 830kg of this collected waste, which was audited by ESRC as follows:

Junk Run diverted 91 per cent of its collected waste (by volume) and 82.6 per cent by mass. This was made up of construction fixtures, fence palings and posts, which were reallocated back into the community; and timber, cardboard, some builder’s waste, scrap metal, some polystyrene, and paper, which were recycled.

Junk Run has a strong environmental philosophy and is constantly striving to find smarter ways to reduce waste sent to landfill. They undertake to recycle as much as possible to avoid sending waste to landfill.

The waste component that does have to be sent to landfill is made of mixed builders waste, which is made of unrecyclable construction materials, such as fibro-cement sheets, hazardous materials and their packaging, including glues, sealants, silicone and composite packaging, for example polypropylene/cardboard electrical reels.

Once landscaping and finishing touches are complete on the site, it is estimated that total waste diversion by volume will be 91 per cent - a great result.

The council is currently working with Naylor Love at AUT Akoranga on the North Shore on a similar project and Junk Run also have some other projects underway.

“The concept is beginning to gather momentum and industry support, including a new website that we’ve developed, Building Out Waste, along with Builders Base, which is a great tool for the industry with advice on how to reduce construction and demolition waste going to landfill,” Mark says.

The ESRC, Aliaxis New Zealand companies, Marley and RX Plastics, and Waste Management New Zealand (WMNZ) were also recipients of a $4.46 million grant from the Plastics Innovation Fund to forward work with the construction industry to reduce plastic from the waste stream.