Public art in Auckland city celebrates the creativity of local artists and the diversity of Tāmaki Makaurau. Plan your own personal art pilgrimage or check out these outstanding pieces of public art that show different faces of the city.

Nobody Here But Us, Richard Deacon, Federal Street

This 3.5-tonne twisty masterpiece was erected in 1991 and was refreshed with a new coat of enamel paint in 2015. Richard Deacon CBE spent six years on the sculpture. The British artist has since been honoured with a retrospective at Tate Modern in London.

This charming bronze villa (less than a square metre in size) is a replica of the house owned by Frederick Seymour Potter, who gifted the land for Potters Park in Mt Eden. Kneel down on the ground and peer through the windows, and you’ll spot furniture. At night a small light glows.

Walk across the Karangahape Road overbridge and you’ll see three six-metre-high poles decorated with banana motifs and illuminated neon phrases like ‘Wait for me’.

Artist Janet Lilo used the colourful nature of the bananas and accompanying neon elements to illustrate the rich cultural heritage and diversity of the community that calls this part of Auckland home. 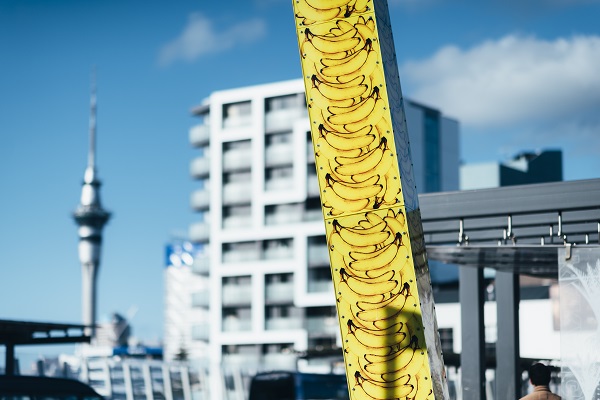 Don't Dream It's Over - Janet Lilo

Mounted on the outside of the Ellen Melville Centre in Freyberg Place is an artwork that pays tribute to feminism and justice.

Ellen Melville was a trailblazer, the second woman to pass the bar and qualify as a lawyer in New Zealand. Later she became the first woman elected to a municipal council in New Zealand.

Lisa Reihana crafted impressive 3.8-metre tall scales of justice, cast in bronze, as a tribute to Melville’s 37-year law career and her advocacy for women.

Boy Walking by Ronnie van Hout depicts a larger-than-life child strolling with purpose and explores the notion of a child transitioning toward adulthood.

The inspiration for the sculpture was drawn from the artist’s 1995 Mephitis series of black and white photographic prints, which are currently held in the Museum of New Zealand, Te Papa Tongarewa.

These much-loved stone sculptures, in place since 1959, represent the anchors used on the Matahorua and Tainui waka that journeyed to Aotearoa in the 13th century.

Russell Clark was a prolific sculptor and painter who created public works seen throughout New Zealand.

The Lighthouse is a full-scale 1950s state house located on Queens Wharf. The colour of the exterior reflects the space between the sea and the sky, as well as the surrounding environment.

When you peer through the windows to get a glimpse of the interior, you will see the artist's representation of the cosmos. Neon lights stand in for constellations. The bright lights of the stars reflect off The English Channel, a glossy, stainless-steel sculpture of Captain James Cook. The coloured lights also represent ahi kā - the idea of home fires burning.

The work of the Helsinki-based art duo COMPANY, Sounds of Sea evokes the ventilation and speaking tubes used on ships. Made from stainless steel with powder coating, the shiny tubes are a magnet for children visiting Wynyard Quarter.

At the entrance to Aotea Square stands a carved wooden waharoa (gateway) that welcomes and embraces manuhiri (visitors). Artist Selwyn Muru chose wood for the sculpture to contrast with the steel, glass and brick of the surrounding buildings.

The sculpture features many figures and details, so it’s worth looking closely to see representations of Māori atua (gods), abstract images inspired by Polynesian tapa cloth, the nuclear disarmament symbol and even a haiku by poet Hone Tuwhare.

For more information about public art in Auckland, go to aucklandpublicart.com